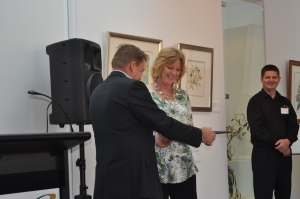 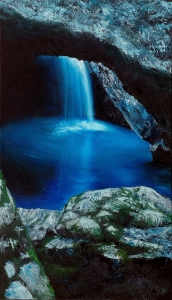 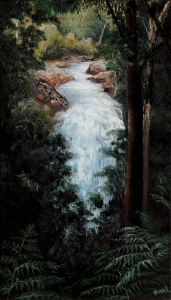 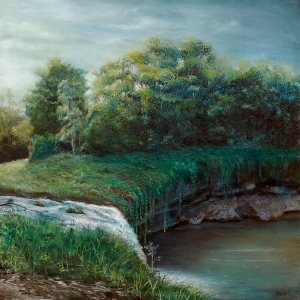 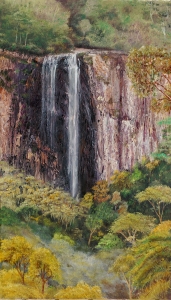 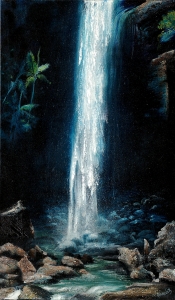 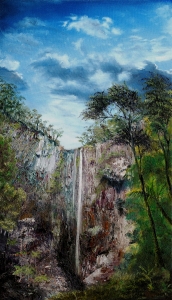 When I received the Caldera Arts Fellowship and found my sponsor was the Northern Rivers Catchment Management Authority, I wanted to approach this body of work with the key theme being water. No living thing can survive without this most basic element.

My family history goes back to among the first settlers of the area, beginning in 1836.  My family lived in a stringy bark hut in what is now the Wedding Bell State Forest.  The family went on to be timber getters and had a sawmill at South Grafton.  In a way, this very family has changed the face of the northern NSW for all time. My Grandfather worked for the Family Sawmill and went on to work for the State Forestry bringing about regrowth and renewable resource timber, before, during and after serving in both WW1 and WW2. Eleven generations of our family have now lived on the Northern Rivers and though we’re immensely proud of our heritage and the positive outcomes as 1st settlers, I am more than aware of the need to preserve what is left of our magnificent National Parks and the regeneration of previously cleared areas of land.
I’m concerned by how the landscape has changed since the early days of my family.  I realise that the very character of change is it’s inevitability, and change will continue, both at the hand of man and the inescapable forces of nature and the environment.  I love the innate beauty and iconicity of this area and after visiting many of the National Parks, I felt it to be an important project, not only for myself, but for future generations to mark our place in time and make record of just how exceptional these sites are.   Most are now protected and I believe they have both cultural and historical significance, not only for the original indigenous custodians of the land, but for us as human beings and society at large.

This body of work began after a visit to Boundary Falls, not long after the rain and was impressed with not just the beauty of the Falls, but the power of the water and how it had carved its way through the solid ryolite rock of the landscape. On completion of this painting a connection was drawn to works by Eugene von Guerard.

In 1852 Eugene von Guerard arrived in Victoria, Australia, determined to try his luck on the Victorian goldfields. As a gold-digger he was unsuccessful, but he did produce a large number of intimate studies of goldfields life, quite different from the deliberately awe-inspiring landscapes for which he was later to become famous. Realising that there were opportunities for an artist in Australia, he abandoned the diggings and was soon undertaking lucrative commissions recording the dwellings and properties of wealty pastoralists.  Luckily for us.

By the early 1860s von Guerard was recognised as the foremost landscape artist in the colonies, touring Southeast Australia and New Zealand in pursuit of the sublime and the picturesque.  He is most known for the wilderness paintings produced during this time, which are remarkable for their shadowy lighting and fastidious detail. Indeed, his view of Tower Hill in South Western Victoria was used as a botanical template over a century later when the land, which had been laid waste and polluted by agriculture, was systematically reclaimed, forested with native flora and made a state park. Von Guerards paintings were highly significant and the historical and scientific accuracy of such work has led to a reassessment of on Guerard’s approach to wilderness painting, and historians believe it likely that the landscapist was strongly influenced by the environmental theories of the leading scientist Alexander von Homboldt who Charles Darwin described as “the greatest scientific traveler who ever lived.” He is widely respected as one of the founders of modern geography. Alexander von Humboldt’s travels, experiments, and knowledge transformed western science in the nineteenth century.

In the spirit of Von Guerard I endeavoured to paint the areas as honestly as possible.

I chose to paint the Waterfalls because for me, they embody the spirit of the land, bringing their life giving waters to us all and helping to nurture our very existence in this place.  They are some of the wildest places we have left with immense natural beauty and spectacular scenery.   Their sounds, smells and beauty resonate with us at a very basic level.

While researching the falls, I began to find out how much of our native flora and fauna is in crisis.   This led me to do the suite of prints of the Vanishing species.  These images can be a little challenging and in some cases, the animals are quite hard to find within the print.  This was done on purpose as a metaphor for their existence and the fact that soon, if we aren’t careful, we may not be able to see them at all.

I also considered the educational component of the Fellowship and decided to aim it toward children as they are indeed our future and along came the book “Who Needs Water”.  The book wasn’t difficult to write and the drawings were done quickly and simply in the hope that kids would try to draw some of the pages for themselves.  While looking for interesting facts for the kids to know, I think I gained a little education myself.

Of all the water on our plant  97% is salty ocean, 2% is frozen ice and 1% is drinking water, 60% of which is used in agriculture and industy.  This leaves us precious little and what’s left needs to be treated for human consumption.  Over half the occupied hospital beds in the world are filled with people who have water-borne diseases

We take our water resources for granted, but when presented with the facts of how very little we have at our disposal, we really do need to stop and think how best to look after and save what there is.

So I would encourage you to save water and look after our resources and that means….

It’s more than just showering with a friend.

“We are the most dangerous species of life on the planet, and every other species, even the earth itself, has cause to fear our power to exterminate. But we are also the only species which, when it chooses to do so, we’ll go to great effort to save what it might destroy.”  – Wallace Stegner